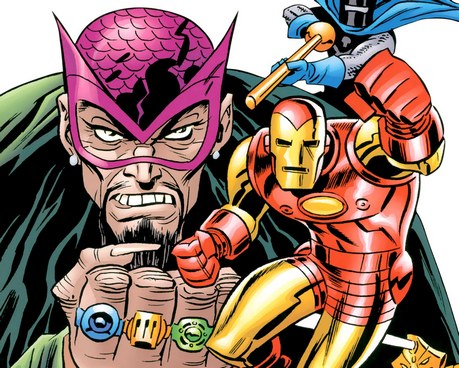 Tenth in our series of Key comics, you should collect them all! This key comic focuses on Iron Man #1, a true classic Silver Age key from Marvel Comics (May 1968).

I have been an old-time Iron Man comic fan, long before he was insanely popular, thanks in part to Robert Downey Jr. and the popular Iron Man movies. Iron Man has been one of my favorite Marvel characters, definitely in the top 2. Who is the other character? My close friends should know who this other character is! All will be revealed in a future post, keep reading.

I started collecting in the eighties, when Iron Man was a founding and regular member of the Avengers, but at the time he was only considered a 2nd tier Marvel B level character. Sure, he had his own long running series, but he never garnered the same respect that Spider-Man, Captain America or Wolverine did. Tony Stark is a smart, cocky, arrogant, inventive, wealthy industrialist, who builds an advanced suit of armor. Iron Man has to be one of the most powerful members of the Avengers, up there with Thor. Using his armor, he can fly, is super strong, can shoot repulsors rays, and is protected from most attacks. He bankrolls the Avengers, yes there would be no Avengers without him. Think about it…where would they hang their capes, or get the money to buy their fancy jets or elaborate Avengers Mansion headquarters? Iron Man originally invented his first old grey clunky armor called Mark I to save his life, and over the years, kept making improvements by making the armor faster, slimmer, more powerful, and even creating armored suits to tackle specific tasks, like as a Stealth Armor to stealthy sneak around like a spy, or even a Hulk-buster armor to take on the Incredible Hulk! He uses technology to better himself and the Marvel Universe. I liked the cool tech of this series. I can’t help but think that maybe this early exposure to Iron Man’s technology and computers helped inspired me to become the computer programmer that I am today. Stan Lee started writing about transistors back in the early day of Iron Man, it was hokey, but it sure sounded good, even if it didn’t make a lot of sense….YET. A lot of fun to read and gave me food for thought! Original Mark I armor, my wife’s favorite armor from Tales of Suspense #37

Iron Man has worn a number of armors over the years. Tony Stark isn’t the complacent type, he is constantly improving his armor for the future fights to come. What new armor are we going to get next? Like a classic car company that introduces its new model every year, the fans look forward to the “New Iron Man Armor Model”. There have been some truly classics ones, some not so much (the famous “nose” armor of the seventies, not my favorite). Most of the time, the armors really worked, and looked slick and cool.

Iron Man is a fun series to read, enjoy, and collect. All of the back issues for the entire original series were pretty reasonable at the time I was hunting for them back in the eighties, except for the Iron Man #1 comic. The original volume of Iron Man ran for 332 issues. I started working backward, tracking down and hunting for the Iron Man back issues. It was an ambitious hunt that kept me searching for about ten years, getting chunks of the Iron Man series at local comic shops, and comic conventions. I eventually gave in and I paid $80 bucks for the #1 in the late eighties. That was my most expensive purchase in my collection for many years, it was unheard of for me to pay more than $10 bucks for any comic. Back then, new comics were 75 cents, it seemed like I was purchasing the equivalent of an Action Comics #1 (1st Superman!). In hindsight, I wished I had bought my Tales of Suspense #39 (1st appearance of Iron Man) that year too, would have saved me a ton of cash! Where is Doc Brown’s Delorean when I really needed it? This comic had a 1989 NearMint price of $420 versus today (2015) NearMint of $42,000, a fantastic increase… one hundredfold! I would like to see other investments give a return like that! A shout out, thank you to my wife who supported me and nudged me to finally get that Iron Man’s Key Grail issue: Tales of Suspense #39 (Iron Man’s 1st appearance) a few years ago, one of my most prized comic books in my collection. Thanks also goes out to my good friend, Craig, who gave me an Iron Man #55 (1st appearance of Thanos) as a birthday present, another big Iron Man key. The Iron Man series also marks the first comic series that I was able to complete in its entirety. Fast forward to 2008, Marvel Comics announces a new Iron Man movie starring Robert Downey, Jr. as Tony Stark/Iron Man. I thought the casting was right on the mark. I got to see a favorite comic book character of mine in a live action movie, one that I would never have thought to be popular enough for the public masses let alone a movie. The Iron Man movie launched the Marvel Cinematic Universe, a slew of classic Marvel characters were brought to the screen, they were larger than life, and Iron Man became a Marvel Comics A-list character. Now, the entire planet knows who Iron Man is, what a what nice validation of my early collecting. I continue to enjoy his new adventures every month, when I get my new issues. The Iron Man #1 comic is by writer Archie Goodwin, artist Gene Colan, and inker Johnny Craig. I am a big fan of Gene Colan. With his innovative unique compositions, Mr. Colan used a distinctive style, one that conveyed a sophisticated use of light and shadow like no one else can. His panel layout and drawings explode with energy. The characters pop out of the page. He is definitely one of the founding Marvel creators from the Silver and Bronze Age. Previously Iron Man shared half of the Tales of Suspense comic series with Captain America, this issue marks the first #1 series dedicated entirely to Iron Man. This comic ends with a special 3 page origin retold story, which is a nice way for Marvel to re-introducing Iron Man to his fans, in his own series.

Even though this comic has seen a steady increase of value over the last 6 years, because of the popular Iron Man and Avengers movies, I still believe this comic is undervalued and will continue to rise. Overstreet Comic Book Price Guide #45 (2015) has the NM of this comic at $1,200.00. The value has increased $100.00 (9%) since the year before, and overall an increase of $875.00 (37%) since 1999. This is a relatively cheap major long-running Marvel #1 from the sixties, compared to other #1s from that era. This comic should be in every serious comic book collection.

Tenth in our series of Key comics, you should collect them all! This key comic focuses on Iron Man #1, a true classic Silver Age key from Marvel Comics (May 1968). I have been an old-time Iron Man comic fan, long before he was insanely popular, thanks in part to Robert Downey Jr. and the popular Iron Man movies. Iron Man has been one of my favorite Marvel characters, definitely in the top 2. Who is the other character? My close friends should know who this other character is! All will be revealed in a future post, keep reading. I started collecting…
Key Comic #10: Iron Man #1
Key Comic #10: Iron Man #1
Jeremy