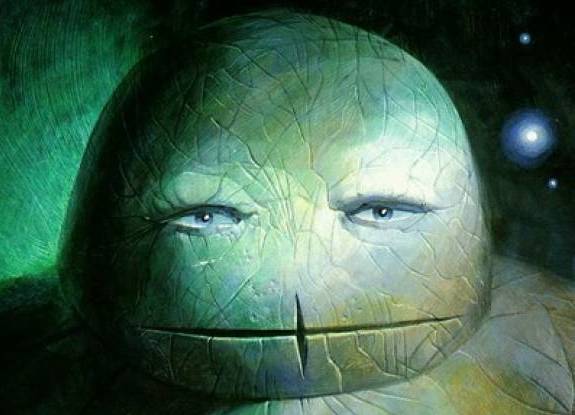 Everybody deserves a break! I have gotten some requests for key comics that are easier to find, and more affordable to buy. Time to deliver…

Dark Horse Comics was founded in 1986, and Dark Horse Presents was their first title, a black and white anthology series that ran 157 issues until its September 2000 cancellation. The series has spotlighted great comics over the years from Frank Miller’s Sin City to Mike Mignola’s Hellboy.

This first issue of Dark Horse Presents contains the first appearance of Concrete in an eight page story by creator, writer and artist Paul Chadwick.

First, a little background about Concrete. Concrete, the main character, is based in the real world, a single fantastic event happens to Ron Lithgow, a shy, soft-spoken speech writer who works for a senator, placed in a strong durable body (Concrete), and is thrust into the public spotlight. There are no supernatural or science fiction plots in any of the stories. Don’t worry no spoiler alert needed, his origin story isn’t told until Issue #3 of his ongoing original series. I can often relate to Concrete, and wonder what life would be like if I was placed in a similar situation. Concrete at first, seems like a Fantastic Four Thing like character, and while he might look similar, that is where the similarities end. Concrete is not tragic or angst ridden like The Thing. He relishes this unique opportunity he has been given, and embraces this new chapter in his life, ready for some new adventures. He attempts to swim the Atlantic Ocean, helps a family save their farm, and strives to climb Mount Everest. These stories are told in the Concrete original series. There are no super heroes, capes, vigilantes or super villains, but rather very human-condition stories told from a fantastic and interesting viewpoint. These stories are fun, and simply different than anything else out there, a breath of fresh air! Concrete #1, his own series.

Concrete later gets his own series for ten issues, then a string of mini-series, each telling a complete story arc. All of the Concrete comics are worth checking out, great reads all around, I highly recommend them. Check out the individual issues or pick up the trade paperbacks. While there haven’t been any new Concrete comics in the last couple of years, all new Concrete comics immediately go to the top of my reading pile. I patiently and eagerly await for the next Concrete story installments… The short story depicted above shows Concrete reading his fan mail, where he gets a request for a paid appearance at a party in Beverly Hills. Because he is’s not a rich superhero and could use the money, he takes the gig.  Being Concrete is not cheap, the logistics of his existence like having to constantly replace the brakes and shocks on his beat up pickup truck, because he is made of concrete lends a human aspect to him. The party doesn’t turns out to be what he expects, however he makes it works and fun antics ensue!  It is a short fun, lighthearted story, but it captures the essence and wonder that is Concrete.

I was able to briefly meet Paul Chadwick and his wife, Elizabeth at a ComicCon some years ago, it was a real pleasure talking with them, they are some of the nicest people in comics. I was able to commission a sketch at the Con, and the next day to my surprise he came back with this fully illustrated drawing (below)! While his artwork is not flashy, Mr. Chadwick is an excellent storyteller with crisp, innovative page layouts. He is one of those rare-breed of comic creators who can write and draw his own stories. He doesn’t rely on a stock set of face expressions for the characters like a lot of artists do nowadays. Both the  and situations he finds himself in are interesting, and the characters are well thought out and developed.  Ron, Larry and Maureen are all characters you could bump into and meet on the streets of Los Angeles.  I have read and enjoyed Concrete comic series many times, each time finding a new hidden nugget that missed before. Dark Horse Comics has announced its intentions to make Concrete into a TV series. No other details have been released yet. This anthology issue also features the 1st appearance of Black Cross by Chris Warner in the lead short story, another character in the Dark Horse Comic universe that shows up in the series from time to time. Both reasons for the series to potentially climb in value in the future.

Overstreet Comic Book Price Guide #45 (2015) has the NM of this comic at $16.00. The value has an increase of $6.00 (16%) since 1999. This comic should not be too hard to find. I was able to score a few issues some years ago.
**Please Note: There is a 2nd printing that exists for this book. The only way that you can tell if the comic is a 1st print or not, is to look at the indicia at the bottom of the first page, and make sure that it does not say “2nd printing”.