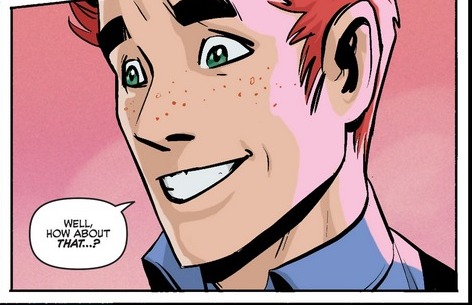 Ok, ready to roll the dice and take a chance? The new Archie #1 isn’t a Key comic yet… but I think it will be. I don’t think there would be much of a risk in taking a chance on this comic. Archie #1 just came out, so hot of the press that the ink is still drying!

Normally, Archie comics are far out of my  “wheelhouse” of comics that I read and collect. Sure, I have been exposed to Archie comics at countless 7-11s and supermarkets, but that has been the extent. I know who Archie, Betty, Veronica,  Jughead and the rest of cast of characters are, enough anyway to do well in trivia games but that’s been it. I don’t gravitate toward humor comics, or comic stories that are one and done in a single issue, like this series. Some collectors and fans love this concept. Personally, I like the long form storytelling of comics, probably why I’m a series/title collector. When something happens in issue #11, I enjoy having it referenced or for it to still be important in say issue #37 and throughout the series. My favorite comics have long serial story lines with continuing heroes, villains, and supporting cast members. So suffice it to say that I was skeptical when approaching this read.

Why have Archie comics been around so long? Archie, the main series, has been running for over 70 years and just ended recently with Issue #666 (the Anti-Christ issue?). This new #1 marks the first Archie #1 since 1942. You could say this character has literally stood the test of time and been in continuous publication since the very beginning of the Golden Age of comics, a rare feat. There have been only a handful of comic characters who pulled this off: Batman, Superman, Wonder Woman, Captain America… and Archie?  In the 1960s, Archie comics were the most popular comics being published in the United States. Even though comic sales have waned since the sixties, Archie depicted the ideal American teenage life, that’s why the series has been a part of popular Americana comic culture. You can pick up any Archie comic and because the story, characterizations and plots are so simple, anyone can dive into the series at any point and get something out of it. Readers are not burdened with having to read decades of stories and plots to find out what has or will happen. It’s simple, boy meets girl(s), boy falls for and goes after girl, struggles with growing up  and get the girl of his dreams… stuff we can all relate to. That’s why these stories have resonated with readers for decades.  Despite the recent trend to make comic stories and characters dark and angsty, Archie comics have stayed the course of remaining light, optimistic and hopeful. However the Archie mythos has changed over the years, adding new characters and situations along the way to keep them a bit more current. For example Kevin Keller, an openly gay character was introduced in Veronica #202 (the issue sold enough to warrant a reprint).  Also, a few years ago the same publisher issued a Walking Dead-like series called Afterlife With Archie and Archie crossovers with the likes of The Punisher and Predator which both sold very well.

So it must be obvious by now that before taking on this article I had not purchased an Archie comic…you might be asking, so why start now with Archie #1?

The new creative comic team of writers Mark Waid and artist Fiona Staples, coloring by Andre Szymanowicz and Jen Vaughn are the reasons, these guys are exceptional! This team was THE deciding factor that allowed me to shell out cash for this comic and write about it. Mark Waid is one of my all-time favorite comic writers, and a true life-long comic fan with an encyclopedic knowledge of all things related to comic books. I will read and collect just about anything he does. He has had stellar runs on The Flash, Fantastic Four, Captain America and is currently finishing a fantastic run of Daredevil.  The artist Fiona Staples is a relatively new artist that has really come into her own superstar status, with her exceptional artwork on the incredibly popular Saga series at Image Comics. She uses fluid storytelling, and her artwork is great. She uses a full range of character facial expressions with details that relay the spectrum  of human emotions. Some artists have a stock set of faces…a sad, angry, and a neutral face for each character they pull out of a bag, but not Ms. Staples. Initially  I admit I was skeptical about this comic however both Mr. Waid and Ms. Staples hit this comic out of the ballpark. I was really surprised. They make the comic instantly accessible to any age reader, and by placing the story in a modern high school setting, make the story more relevant to today’s audience. The story and artwork is fresh, draws you in and makes you want to see what happens next. I like a good old fashion story and artwork in my comics so as long as Mark Waid and Fiona Staples continue doing this comic, I’ll continue reading it. As as fun bonus, this issue also contains a back story reprint, the very first Archie comic story from Pep Comics #22 (1941) over 70 years ago, so you can see how Archie first started out, and how he has evolved to the character that he is today. This comic just came out a few weeks ago, so it hasn’t made it to the pages of the Overstreet Comic Book Price Guide yet! The comic is currently cover priced at $3.99, but I don’t think it will stay there very long. I will update this comic’s price data when the future pricing changes. FYI, Pep Comics #22 (1941) (1st appearance of Archie) is currently valued at $250,000.00 from the latest Overstreet Comic Book Price Guide #45 (2015). Maybe some day down the line this new Archie #1 will join the ranks of valuable collectible comics, just maybe… Oh yeah, there are about 20ish variant covers to choose from, you can see all of them here!

Other recent Archie comics to keep watch for:

Ok, ready to roll the dice and take a chance? The new Archie #1 isn't a Key comic yet... but I think it will be. I don't think there would be much of a risk in taking a chance on this comic. Archie #1 just came out, so hot of the press that the ink is still drying! Normally, Archie comics are far out of my  "wheelhouse" of comics that I read and collect. Sure, I have been exposed to Archie comics at countless 7-11s and supermarkets, but that has been the extent. I know who Archie, Betty, Veronica,  Jughead…
Key Comic #12: Archie #1
Key Comic #12: Archie #1
Jeremy