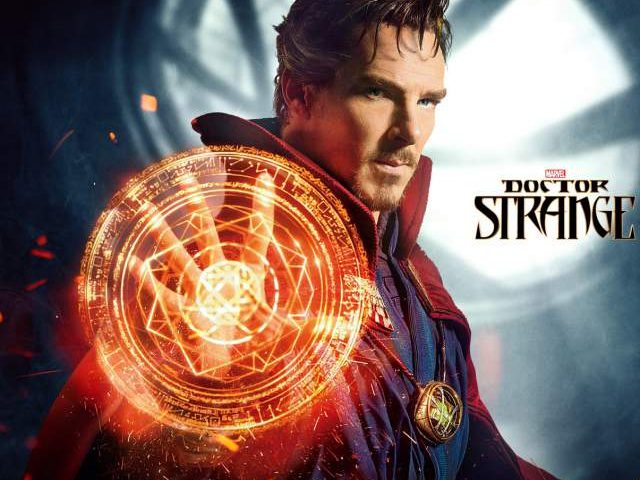 How very appropriate that I write this post while still being under the influence of anesthesia from a dentist appointment, how else could I have the full “trip” experience and enjoy the wild and wacky, psychedelic surreal magical worlds of Steve Ditko’s Doctor Strange! The classic splash page is another fun Ditko experiment like an odd Escher drawing with magical dimensions, where the impossible becomes possible.

Don’t be fooled by the tiny cover image size at the bottom quarter of the cover, this issue’s importance is based on the backup Doctor Strange story. These were not backup stories, in my humble opinion the Doctor Strange stories in this era are THE main stories.

Stan Lee and Steve Ditko are of course famous for creating Marvel Comic’s most famous character, the Amazing Spider-Man, but they also created this Marvel mainstay, Doctor Strange. Mr. Ditko was plotting and drawing the Doctor’s adventures, taking half of the Strange Tales comics at the same time when he was drawing his famous Spider-Man comics from Strange Tales #110-111, 115-146. Stan Lee would write most of the stories and provide dialogue. I actually prefer these early Doctor Strange Adventures over Spidey’s early comics, and I feel that these early Dr. Strange stories and artwork are true classic Marvel Masterpieces. The early adventures started out as 5 or 8 pages, and eventually grew to 12 pages. Mr. Ditko’s Doctor Strange adventures, even though they were not full fledged 22 pages, packed a tremendous amount of story and artwork with the limited number of pages and panels. Mr. Ditko is a true master of comics, with incredible storytelling and craftsmanship. He is part of the rare elite of legendary comic artists. If there was a Mount Rushmore for comic creators, he would definitely be one of the 4 creators on it.

You haven’t experienced the early Doctor Strange’s comics yet? I give it my highest recommendation, and urge you to check out this Marvel Masterworks volume.

This issue boasts the first appearances of two vital Doctor Strange characters, Clea and Dormammu. Even though she remains nameless for a few issues, Clea would later become Doctor Strange’s main love interest, and be a fixture in a lot of his main stories. Dormammu would become the good Doctor’s main nemesis. His Joker to his Batman, his Lex Luthor to his Superman, his Red Skull to his Captain America, his Green Goblin to Spider-Man… you get the idea. Dormammu would be mentioned in earlier adventures starting with Strange Tales #111 by Baron Mordo, but we, the readers, had to wait well over a year, before we finally saw who he was, talk about some great suspense building by Lee and Ditko. Dormammu is an extremely powerful magical being from an alternate dimension called the Dark Dimension. Other mystical users across all dimensions fear this Dread One, whose power is even more powerful than Doctor Strange, the world’s greatest magic welder, the Sorcerer’s Supreme! To top it all off, Dormammu has even single-handedly fought the supremely powerful universal embodiment, Eternity! He will go on to plague Doctor Strange and the Marvel Universe for six decades. Marvel Studios has announced that Benedict Cumberbatch will be playing Doctor Strange in the live action movie of the same name in 2016. Rachel McAdams, Tilda Swinton and Chiwetel Ejiofor have also joined the cast. Great casting! I don’t see how we could have a Doctor Strange motion picture without having his main villain in it! Dormammu has flames for a face, how cool would that be on the big screen? I am a big Doctor Strange fan, and I’m eagerly awaiting this Marvel Studios movie!

And oh yeah, this comic features the main lead story along with a Human Torch story also featuring the Fantastic Four vs. the Mad Thinker and the Puppet Master… just as an added bonus.

All of the early Doctor Strange issues in Strange Tales are way undervalued, and will be in high demand and hard to find in the near future!
Overstreet Comic Book Price Guide #45 (2015) has the NM of this comic at $1,000.00. The value has increased $750.00 (300%!) since the year before, and overall an increase of $955.00 (222%) since 1999. I am glad that I picked up this one early enough before it became red hot. I think the movie will drive this comic even further into the stratosphere!

How very appropriate that I write this post while still being under the influence of anesthesia from a dentist appointment, how else could I have the full "trip" experience and enjoy the wild and wacky, psychedelic surreal magical worlds of Steve Ditko's Doctor Strange! The classic splash page is another fun Ditko experiment like an odd Escher drawing with magical dimensions, where the impossible becomes possible. Don't be fooled by the tiny cover image size at the bottom quarter of the cover, this issue's importance is based on the backup Doctor Strange story. These were not backup stories, in my humble…
Key Comic #7: Strange Tales #126
Key Comic #7: Strange Tales #126
Jeremy