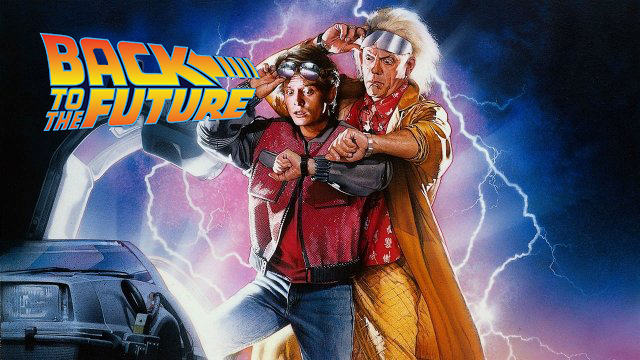 Brand new Back to the Future #1 comic!

Roads? Where we are going we don’t need Roads!!!

This Key Comic post is very unique for a couple of reasons. First, this week marks the date that Marty McFly and Doc Brown go to the future in the Back to the Future Pt 2 movie, this year marks the 30th Anniversary of the movie.  Secondly, I am marking a brand new comic by IDW Publishing  a “Key Comic”!

Back to the Future one of my favorite movie of all time! I love time travel stories, and this one is one of the best and well-loved of the from 80s, which has truly withstood the test of time. I watched the movie again last night to commemorate 10/22/2015, the date visited by Marty and Doc all those years ago.  I have to say the movie still holds up 30 years later, I’m still moved watching George McFly knock the crap out of the ultimate bully, Biff and cheer for the Delorean to get struck by lightning in 1955 so that it can blast to the 80’s in an awesome blaze at 88 miles an hour! I love the soundtrack by Alan Silvestri and the great songs by Huey Lewis and the News. I bought the soundtrack on tape back in 1985, and I listened to it so much that I wore out the tape… I guess that’s the “Power of Love”!

5 years ago my wife surprised me for my birthday by taking me to the limited re-release of the 25th Anniversary Back to the Future movie. She even made custom “future” visors for us, just like Doc Brown wore in the movies. How lucky am I! We got to watch the movie on the big screen again,  along side a sold-out movie theater of Back to the Future fans! It was an awesome experience and one of the best birthdays EVER! Hey wait a minute…this website is about comic books, right! So why you might be asking is this brand new comic a future Key (other than the well-establish fact that I am of BTTF fan)? Well, this is the first comic book with a new original story from Bob Gale, the original writer of the Back to the Future movies plus I have been waiting twenty years for a new BTTF story…Finally got it!  I found out that the day before the comic was released IDW Publishing was already going to be doing a second printing BEFORE the comic even came out. It’s a very good sign for collectors when the supply of the new BTTF #1 comic (with a small print run) cannot meet  demand. The comic book stores underestimated the demand on this comic, and forced it to be Sold Out at several comic stores. The new comic is a lot of fun, tells a brand new official story set in the awesome Back to the Future universe. The interior artwork could improve however the variant covers are pretty cool, they created several so there are lots to choose from.

Pricing data.
Not a lot of data here yet, since the comic just came out on 10/21/2015! I think this one will be going up in prices on eBay pretty quickly! My advice is for you to go grab your copy as soon as you can, before the comic disappears in a flash of light and blazing flame trails! Hot tip: One of the variant covers is done by super hot cover artist J.Scott Campbell. His Amazing Spider-Man covers are well sought after by comic fans, and have driven the prices up on those comics just because he did the cover art! His variant cover for Back to the Future #1 is going to be red hot and a great comic to track down and get: