Waiting for the Con to Open

I am writing this on the weekend right before the biggest yearly event in comics, the world famous San Diego ComicCon. I have made the yearly pilgrimage there for the past 28 years. Usually this time, I am prepping for the show, getting my want list in order, pulling my comics to get autographed or CGCed, and packing.

I first starting going to this convention back in the late 80s, when the con was held at the old downtown San Diego Convention and Performing Arts Center.  Its entire show was held in its main room about 10% of the size that it has grown to now at the newer convention center. It was dedicated purely to comics, quaint in size, intimate, with about 5,000 fans attending. You could meet and talk to the legendary comic creators like Jack Kirby, Will Eisner without having to wait hours in line. They would usually be at a small table with one or two people at their tables talking to them. Very approachable. I have met some truly wonderful people, I made some network connections that allowed me to work on comics during this show. But of course, comic books were not cool or mainstream like they are today, so the male to female ratio was off the charts! Maybe 1 female to every 15 males. You didn’t tell people you went to ComicCon back then, because comics still had the stigma of being associated with strange geeky nerds with no social skills. The Con now is attending by over 130,000 people. We have come a long way!

Every year it becomes a little harder and harder to attend, the convention has grown in such popularity that the tickets sell out with 45 minutes of posting. You better believe that you better be prepared, have your Member ID log setup through the ComicCon website and enter the website exactly at the minute when the ticket sales go live, and then pray to God that you are one of the lucky individuals to get picked with the random lottery process and are able to purchase tickets. It wasn’t always this stressful getting tickets, it used to be a lot easier to get tickets. You went to their website, and order tickets. It has only become the huge Media circus in the last 7 or 8 years. Hollywood media invaded ComicCon about 10 years ago, finding it ideal to promote their latest movie and television wares to an audience tailor made to their genres. How many Twilight Fans have invaded ComicCon during the run of the Twilight series of movies, waiting to get into Hall H to sneak a peek at some of the stars and glimpse some new footage of an upcoming movie?

Getting hotels has also become quite a chore. People shell out extravagant prices for hotel rooms, even spending $500 bucks a night at a national motel chain such as Motel 6! “Tom Bodett, didn’t leave the light on here in San Diego!”  Here’s another tip, if you plan on going to the show, book your hotel room as early as you can, possibly six months before the show at the beginning of the year. The show organizers have setup a massive network of free bus shuttles from all around the hotels in the downtown area to shuttle the fans to the convention center. I highly recommend taking advantage of this great free service. Parking and driving anywhere close to the convention center has become expensive and time consuming. Just not enough parking spots to fill the incredible number of people who are attending.

It sounds like a real chore, so why do I go every year? I do look forward to hanging out with friends, talking about comics, living breathing everything comic books, and oh yeah movies and tv shows too. Some of favorite things to do during the show is to meet and watch other fans. Many fans dress up in elaborate costumes called “CosPlay”. I enjoy browsing the dealer room, the hunt and searching for some missing “key” comics to fill in gaps in the titles I am collecting. I visit the comic publishers, and see what exciting new comics are coming out from them in the near future. You can attend a wide variety of panels on every subject under the sun, you can waiting outside for the famous Hall H at 6:00 am in the morning, to get into the room to attend high profile Hollywood movie panels, see some exclusive world premiere new footage that will be on YouTube.com in a month, where famous movie stars attend, to sell the audience on their upcoming new movies. You can see and meet and famous comic book creators, get some comics autograph. Wait in long lines, buy exclusive items that are only available here. I will enjoy it and the spectacle, for now. It’s not a vacation, it’s an adventure… Other venues such as Las Vegas and Los Angeles have been try to woo the show away from San Diego, with the promises of larger convention space and more hotel rooms. As of July 1st, 2016, San Diego has made a deal to keep ComicCon in San Diego through 2018.

Be prepared well in advance. Read about what to expect from ComicCon, find some helpful tips. Bring and wear comfortable clothes and shoes, you will be walking a lot!  Don’t forget your digital camera or phone to take plenty of pictures. Be patient, and be prepared to have your mind and senses blown! See you there! 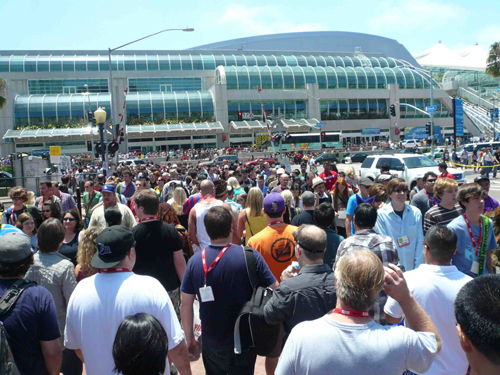